We have taken the difficult decision to remain closed throughout 2021 to protect our volunteers.

Located in the Vale of Taunton Deane, Bishops Lydeard is a small village near the market town of Taunton. There were originally two mills in the village, Higher and Lower, supplying the area with flour.  Higher mill has been subsequently demolished, leaving this excellent example of an overshot waterwheel at the lower mill.

The watermill has been renovated and was officially opened by the town Mayor on Saturday 10th May 2003.

Work has been done to restore the mill so that it is a working mill. Although we now know that there was a second wheel (used for fulling) on the site there are no plans to replace that.
Among the many traditional trades and crafts displayed are the wheelwright's shop, transported from Devon and preserved exactly as it was left on the day the owner shut up shop, and the equally authentic Blacksmith's shop. Another aspect of the Mill and Rural Life Museum presentations are the models depicting the many types of mills that exist plus various scenic displays and some 30 carriages and wagons. 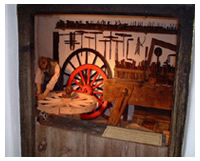 These are not the only items that are featured, so why not make a visit to check out what else is on view?

There is much to see and do in the village of Bishops Lydeard. Allow at least half a day so you can relax in our Dusty Miller's tea room, with a range of home made cakes, soft drinks, ice creams and confectionery, before visiting other attractions such as the West Somerset Railway or the Quantock Brewery.